I haven’t been posting lately. I have written before about my depression, and it is in full attack mode at present. It was suggested that I go for a walk to get the blood flowing and the endorphins pumping, so I did. All I got out of it was cold and a picture of some cool looking lichens. 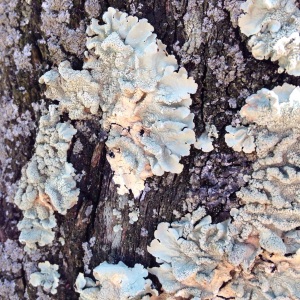 I posted the pic to Facebook, noting that I took it on my depression walk. I opened up on the thread about where my head has been, and I posted this:

September 19, 2005. My Dad was a cancer patient, and the cancer was winning. My Mom (with whom I have a whole host of other issues, but that’s a different story) fearing that the doc was going to say it’s time to stop treatment, asked me to take him, to convince the docs to keep fighting.

The doc did say the cancer was winning, and he did say that my father wouldn’t get any better, and he did say that if he wanted to stop treatment, now might be the time to do it. My dad, not dumb, but uneducated and clouded by pain killers didn’t quite understand, so I translated doc speak for him. I told him that it was okay to be done.

“I could never do that, your mother would kill me.” (Seriously, we all have issues with her.)

And he decided he was done, and 10 days later he was gone.

My asshole brain has since spent the better part of the last nine years convincing me that I’m a killer.

I know this is not true. I didn’t kill him, the cancer did. I know that what I did was right, I know that if I had to do it again I would tell him the same thing.

And I know that it was the singular moment that broke me. I was not the same after, it’s the thing I can’t get past.

That’s what has been going on inside me for the last few months. When I am down, the guilt and shame and rageful self-loathing come back as the cherry on the sundae. When it comes back, not only do I get stuck, I don’t want to get unstuck — convinced I am a killer, I don’t think I deserve to be happy.

My therapist finds me fascinating (I think), because I am remarkably self-aware of my psychology, and can’t seem to do anything about it. I’ll tell you, it’s tremendous weight on my shoulders and a terrible burden on my chest, thinking that you killed your father. All those times I “joked” about how when I come to sit on death’s door, shoot me full of chemicals and plug me in to every respirator, aspirator, pump, tube, DVR, and electric can opener you have I absolutely meant, because I decided long ago that no one would ever have to go through what I did.

So there it is. The crux of the thing that made me what I am today, and I feel utterly powerless over it. Sorry if that was an uncomfortable overshare, but that is where I am today, and for the past week, and the past six-months, and off and on for the past nine years. Simultaneously heartbreaking and ridiculous, cognitive distortion at its destructive finest. I’ve been trying so hard to to reprogram the way I think about that day, and so far nothing has worked.

One of my dearest friends immediately replied, “Charlie, flip the script. I want you to sit down and write this from your Dad’s perspective.”

I want to thank you. You did me a favor. Something I couldn’t do for myself. You let me make my own decision.

If I’m completely honest, I knew I was dying. It was my second go with cancer in a three years, and it always comes back harder the second time around. Your mother’s a basket case, always has been, you know that. The mere mention of my passing sent her over the edge.

It wasn’t fair to make you come with me, knowing what we all knew, and telling you to to “fight” for me. I’m sorry we didn’t get together and talk it all out before. I’m sorry that you had to do all that on the fly. I’m sorry that it fell to you to tell me it was okay to be done.

I’m sorry that I needed someone else’s permission to make the call I wanted to make.

Son, let me make one thing clear — I died from cancer. Nobody killed me. Cancer killed me. It’s a funny disease, cancer is. A guy has a heart attack, it’s because his arteries are so clogged with bacon grease that his heart stops working. It’s like an engine with a gunked up carb. There’s a broken part, so you fix the broken part.

Not cancer. The cancer cells aren’t broken, they’re doing exactly what cells are supposed to do. Divide, reproduce, spread. Only it’s out of control, it can’t stop, it won’t stop. All the best treatments, chemo and radiation, they kill the cancer because they kill all the cells.

That’s what makes cancer such a pain in the balls — the disease isn’t really the sickness. A tumor, in its own weird way, is perfectly healthy. And the when the tumor is healthy, the patient suffers.

So let’s just say my cancer was very healthy, and I suffered.

There was nothing, nothing at all, you could have done that would have changed that, and by that point, I wouldn’t have wanted you to. I’m sorry you got left holding the bag.

I was proud to be your father, and I miss you.

I miss you too, Dad.

3 thoughts on “A letter from my father”